Did this ever get solved?

I am experiencing this behaviour in MM 3.2.4.1304 in shuffle mode:
I have a playlist with 259 songs.
Songs which have been played once or more already, are played again very often.
Songs which have been played zero times, are played only very, very occasionaly.
The shuffling mode does not work like it should: play *all files* first and then start over.
Bottomline: I keep hearing the same music over and over again!

(I don't press stop in between.)
Top

Last time I checked on MediaMonkey 4 it played all files before repeating a file.
Lowlander (MediaMonkey user since 2003)
Top

Sorry, I see now I have replied to a topic that's about MM4 betatesting.... so, never mind!
Top

I'm using the Gold Version of MM v4.0 and I seem to be having a similar issue. I have media monkey scheduled to run every day and since it's been running for at least a week (I close it every night), there are at least a third of the songs that show a '0' under the "Played #" column. How is that possible? Had the same issue with version 3 and thought upgrading would correct it. I have shuffle enabled and auto-dj disabled.
Top

Are you playing from the My Computer node? Only tracks played from the Library (one of the Collection nodes or Playlist node) will have their played data stored.
Lowlander (MediaMonkey user since 2003)
Top

Have done the same observation. A playlist with 50 songs shows a least 10 songs with played 0 times and more than 10 songs shows playing 2 times or more.
Yes i´m using playlists nodes.
Using MM4 but this happend in MM3 also.
Top

i made a playlist and this isn't truly random....some songs do repeat. is there a media player out there with a truly random feature that plays every song in a folder without repeating any?
Top

psm19psm wrote:i made a playlist and this isn't truly random....some songs do repeat. is there a media player out there with a truly random feature that plays every song in a folder without repeating any?

Truly random means that there will be repeats. If you just want a shuffled list put your playlist into now playing, then right-click in the now playing area and click List > Randomize list.
MediaMonkey user since 2006
Need help? Got a suggestion? Can't find something?

Please no PMs in reply to a post. Just reply in the thread.
Top

I am experiencing this as well... despite of having a library of thousands of tracks, only the same 11 or 12 will get played continuously, independenty of having shuffle turned off or on
Top

Sorry if something similar has been suggested, but I'm not going to read this entire thread to find out.

My suggestion is to create a Not Heard Recently playlist. Whatever rules you like plus Last Played > (Days Ago) 21 (or however many days you'd prefer.) 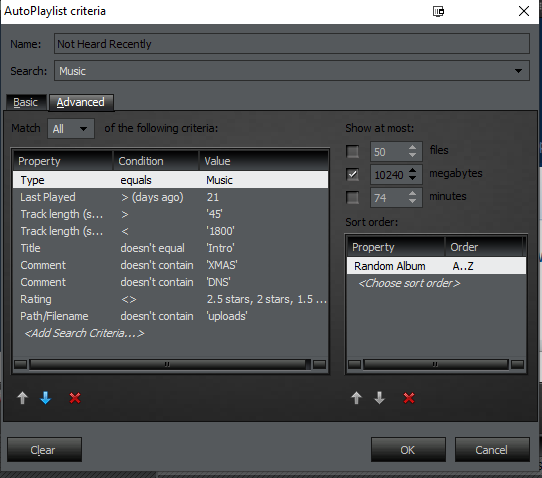 You can then use Auto-DJ to pull from this list.
Top

Hi,
I would suggest that you Limit to 1 Track instead of size and Use simple Random Instead of Random Album and then compare results.
Best regards,
Pavle
MediaMonkey Team lead QA/Tech Support guru
Admin of Free MediaMonkey addon Site HappyMonkeying

I have the same issue on beta software it was working before this issue songs keep replaying same song I have 300 songs.
Top
Locked
42 posts