This script places a new sub-menu in the menus when you right click on song(s) in the 4 pop-up menus (Main Window, Track List, Now Playing & Menu_Pop_Tree) as well as a menu item in the Search toolbar. It reads through an ini file and loads the menus with urls for various web sites. There's also the ability with the dockable panel or separate MM window to do tagging. Choose one of these windows, select text in the browser, then click the appropriate button to copy the text to the tag (see screenshot below).

To use, right click on a song and find the new "Web Lookup..." menus. Select one of the items from there. This script was inspired from the excellent WebNodes script as well as WebPanels. I borrowed the URL parsing code from those scripts (thanks Trix!) as well as the LogMe code which is credited to psyXonova.

Version 1.55 Update May 15, 2008 Installer for v 1.55
- Added right-click Recent items to the Web Node
- Added constant at top of script ("optionToolBarUseIcon") to allow use of icon rather than text for the "Web Lookup" menu in the search toolbar. Edit the script if you prefer an icon over the text for the toolbar button (this is for Queseuq - I'll still work on a panel for Tools/Options though)

Version 1.54 Update May 14, 2008 Installer for 1.54
- Fixed bug introduced in 1.53 when I auto-loaded the Web Lookup Node. Reverted back to previous behavour which is to not load the node until the user selects for it off the menus
- Fixed the bug (I think) in 1.53: "A component named RCFW_WebForm already exists."
- Added "Recent Webs" drop down to the Panel & Form. Each time you select a new web lookup from one of the right-click menus or the new drop down, that selection becomes item 1 in the drop down and all the other items move down a step. It keeps the 5 last webs handy for you. Now you can select the web you want from here to get to it quicker. I could expand the count from 5 if needed - so please give me feedback on this feature.

This occurred sometimes if you had opened the Dockable Panel or Form, tagged something, then changed the web page you were viewing in the Panel or Form, then tried to tag something.
- Added "Ext" button (for "external browser" to the Dockable Panel and Form to launch the current web page in an external brower (see screenshot)
- Added code to automatically add the Web Lookup Node at startup
- Fixed code so if you open a new Form while one is already open, it kills the first form before opening the second one (to prevent lots of forms from showing up on screen)

Version 1.52 Update May 10, 2008 Installer for v 1.52
- Fixed bug that didn't let you lookup the selected song in the Now Playing window
- Renamed "MM separate window" to "MM form" - behaviour is the same though
- Added button on the Panel & Form to allow you to place the navigation bar on top, left, bottom or right. See screenshot below. Click the "Nav Loc" button in the top right to cycle through each location
- Minor code fixes
- Added more strings at the beginning of the code to make it easier to localize to non-english if desired (you'll have to manually edit the script though)
Version 1.51 Update May 1, 2008 Installer for v 1.51
-Fixed bug that forgot to place the RightClickForWeb.ini file in place if it wasn't already there
-Fixed positioning of buttons and text to work with Glided skin
-Added constants at top of script to allow you to choose where the Nav bar appears - last version was hard coded to bottom of window. Now you can choose top, left, bottom or right. Future update will add the ability to choose from an option sheet in Tools/Options... For now - if you wish to put the Nav bar in a different place edit these 2 lines:

Version 1.5 Update May 1, 2008
-Made Separate MM Window always stay on top
-Added persistent Web Panel Option
-Added menu item to View Menu to show the Web Panel (you can also show it from the right click menus)
-Added ability to do tagging from the Web Panel or Separate MM Window Options (see screenshot) To use, select text in the web page and click the appropriate button. (Idea was "borrowed" from WebPanels then enhanced to give access to all tags)
-Added ability to change any of 8 buttons at bottom of window to select different tags. Select the drop down arrow to choose a different item to tag
-Added ability to auto update Web Panel or Separate MM Window to now playing song
-Added option in top of script file to set the Web Node to auto-update to now playing or not (future update will move this to Tools/Options)
-Installer asks if you want to overwrite existing ini file. Please back yours up anyway if you've customized it (I haven't had a chance to really bug-check this feature )
-Added code to replace extended characters with basic (english) 26 characters (e.g. Replace(text,"À", "A")
-Added text for the buttons as constants at the beginning of the script if you want to localize it to something other than English (if you do this, be sure to only change the text inside the quotation marks)
-Update ini file with some new web pages (please post yours if you've got some I don't use)

Version 1.3 Update April 6, 2008
Download the full installer for v 1.3 **Includes the RightClickForWeb.ini file** If you've customized your RightClickForWeb.ini file, please back it up before installing the new version as the installer will replace it with a new version.
-Streamlined the code
-Moved the toolbar button to the search toolbar
-Created an mmip installer
-When you use the "Web Lookup" node (ie MM internal browser), it automatically updates to the new song when the now playing song changes
-Added ability to choose which browser to use to the menu on the Search toolbar
-Added ability to turn logging on and off, view log and delete log from the menu on the search toolbar
-Added more web sites to the ini file

Version 1.1 Update March 7, 2008
-Added right-click in the Menu_Pop_Tree
-Added menu to the Standard tool bar - now you don't even have to right click

-Added separate menu for Selection vs Now Playing
-Added ability to set where to launch the browser - default is to an external window like in previous version, but you can also set it to launch in a MM window or the MM built-in browser. See the instructions in the code below for setting your preference. I could give you a choice at run-time rather than set your preference, but then it starts getting lots of menus and I think would be confusing. If anyone has UI suggestions, please let me know!
-Added many more websites to the ini file. The more entries you keep in your ini file, the longer it takes to open MM. Mine opens quickly, but I've got a fast computer. If yours takes too long, you might want to remove some of the entries.

Here's a screenshot of the persistent web panel and menu item in the Search toolbar showing where to select which browser to use. Note:
-the top left of the dockable panel (vertical text in this screenshot) shows the caption I chose from the right-click menu
-top of panel shows the song title, album and artist
-top right button to turn on/off the auto-update for the Now Playing song. (not showing in screenshot - but it's there...) When checked, the panel automatically updates to the new song.
-Top left two buttons < > for Go Back and Go Forward
-Next 2 buttons are "NP" for Now Playing or "Sel" for Selected song - allows you to update the song the browser is looking up without having to go back to the right-click menus. (Note: The "Sel" button sometimes does not select the song selected in the "Now Playing" window - it will select the song in the Main Window instead.)
-Next 10 button/drop down combos. Select the drop down arrow to choose a different item to tag. Select some text in the browser window, then click the button to copy the selected text to that tag. 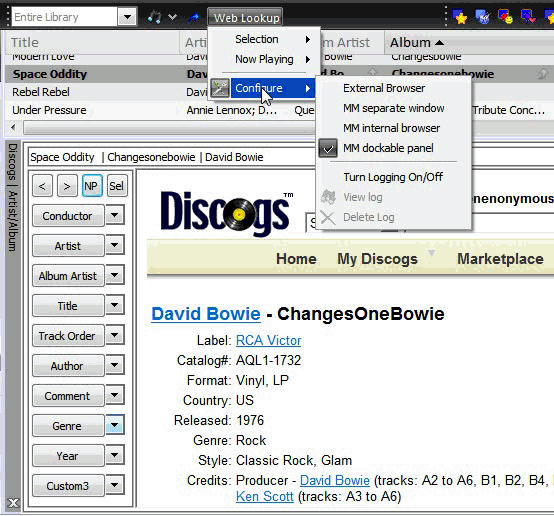 This is awesome! I love the idea and I love how the script works!

It's great to have this functionality for all the songs and not being restricted to the song I'm listening to.

This is a nice one, now the features of webnodes with an added convenience. Gonna have to play with this one, Good job!!

Your script is so powerful it makes me want to cry...

I'm working on an update that gives the same functionality, but rather than the selected file, it will pull up the web for the currently playing song - sort of the same as WebNodes does, but via a right click. I'm busy this week, so don't look for anything till the weekend.

Also - if anyone has other websites that you've found, please post the code for them. I'll add your sites to my listing in the first post for everyone to benefit.
Last edited by onenonymous on Tue Mar 04, 2008 6:12 pm, edited 1 time in total.
My scripts: Right Click for Scripts | Right Click for Reports | Right Click for Web with Tagging | Clean Scripts.ini | Clear Now Playing Button | MusicBrainz Tagger | Yahoo Music Tagger | Play Albums
Top

Now I am the opposite, I prefer to have it open in a browser.

this is awesome man, i hated always looking up info in the built in browser (IE) and now i can just search with Firefox!! thanks a lot man, really nice!!!!!!!!!

Yes, this is fast becoming my most used script after Right Click for Scripts, of course. Gotta right click.

Question: How would I go about tweaking the Amazon menu item to only go to .co.uk addresses? I live in Denmark and use Amazon.co.uk almost exclusively. I would love to be able to go there from MM.

spacefish wrote:Yes, this is fast becoming my most used script after Right Click for Scripts, of course. Gotta right click.

spacefish wrote:Question: How would I go about tweaking the Amazon menu item to only go to .co.uk addresses? I live in Denmark and use Amazon.co.uk almost exclusively. I would love to be able to go there from MM.


I don't have MM here, so can't check, but it should be as easy as changing all amazon.com entries to amazon.co.uk. So:

In general, go to the URL of the site you're looking for, and see how it's constructed. Replace any instance of the artist name with %artist, replace the album name with %album% etc. In some case, we use Google to find the page so you may try to mimic the entries that I have above that use google just replacing the "site:amazon.co.uk" piece with the actual site. This may not always work, but it often does for me.
Last edited by onenonymous on Wed Mar 05, 2008 10:54 pm, edited 1 time in total.
My scripts: Right Click for Scripts | Right Click for Reports | Right Click for Web with Tagging | Clean Scripts.ini | Clear Now Playing Button | MusicBrainz Tagger | Yahoo Music Tagger | Play Albums
Top
Post Reply
183 posts