Report bugs & feature requests for MediaMonkey 5 and learn about the newest builds.

Hi there,
I'm using MM5 to upload songs to google play music, and when I tried to do that today, I was greeted with a MAX_LIMIT_REACHED error.

Turns out that gpm has a hard limit of 10 devices per account and I have reached that limit (and for whatever reason you can only deauthorize 4 devices per year). 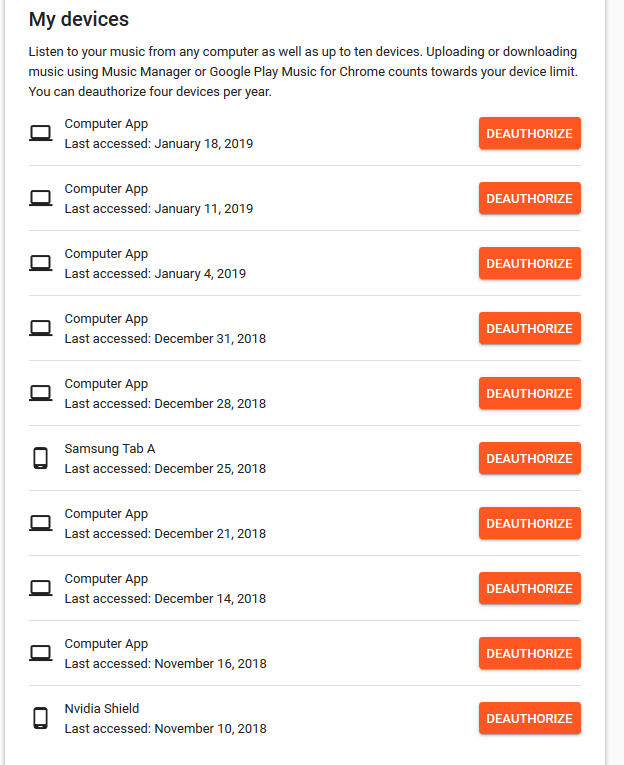 I only access gmp with MM5 on a single computer (except for two devices which are explicitly listed), and the timestamps match dates for which I know I used MM5 to upload songs to gpm, so it's probably a safe bet that MediaMonkey is related to the issue in some way or another.

I haven't checked how the authentication with gpm works and if the authenticating app needs to provide some kind of device ID which is used for the device limit. If that's the case, it might be a factor that I usually keep up with new MM5 releases.

I install MM5 portable, so when upgrading to a new release I back up the portable folder, remove the old MM5 directory, install the latest revision and move the backed up portable folder to the new directory. Data that's persisted in the database or persistent.json should therefore carry over, even between releases.

Update: To further test this, I uploaded some songs to gpm with MM5 yesterday evening and retried the same today:

Both uploads were done with the same instance of MM5, no settings were changed, and I made sure not to access gpm with any other device or application.
Top

I had this error a while ago ... I can't find the thread where I got help, but here is one other thread where I was responding to someone else with the issue ... roll to the next page for Ludek's post
https://www.mediamonkey.com/forum/viewt ... 98#p451898

btw, for each new release of MM5 I delete the old version, and start fresh ... this means that i go through the authentication over and over again, and the json file is not carried forward ... this is not causing me problems with this google limitation ... that I know of

nb. I don't listen to GPM too much ... mostly just testing MM5 (which doesn't involve listening), and the 2nd device on that list is my phone, where I do listen sometimes.
Top

Well in any case, I had a look at the gpm login function and the only thing that's not hard coded (that I could find) is the mac address which is retrieved with. app.utils.web.getMACAddress(). I do have a couple of virtual network adapters used for VMs and VPN, so that could be a likely culprit.
Either one of the virtual adapters changes its mac address over time or getMACAddress gets confused and returns a different mac everytime it runs. Without knowing what the function does I can only speculate, though.
Top

I might have found it. A couple of the virtual network adapters use a mac address thats dynamically assigned from an address pool in HyperV. Which means that I could set up the network adapters to use a static address, but I'm honestly not sure I like that solution. Not only would that mean having to change network setting for a network that's working absolutely fine, it could also potentially introduce issues down the road. I'd also need to change the scripts that deploy and configure windows machines with an exception that's only needed for a single use case. Plus, the computer I'm using MM5 on actually has a physical network adapter with a static IP.
Top

Hi, thanks for reporting and for the findings/debugging!

To be fixed as https://www.ventismedia.com/mantis/view.php?id=15397

Yes, couple of the virtual network adapters using a mac address that is dynamically assigned from an address pool in HyperV
could be (and most probably is) the cause of this issue.

I will try to fix it by fixing the app.utils.getMACAddress() function to try to filter the "virtual" network interfaces.
Could you please send me screenshot of your 'ipconfig /all' command so that I could see your interfaces?
Let's send me private message including the screengrab (to stay private), thanks!
Ludek